Previous Story Compatibility issue: Sigma announces that MC-11 mount converter may not focus properly on Sony A9
Next Story Google officially takes Nik Collection off life support and announces it will no longer update the software 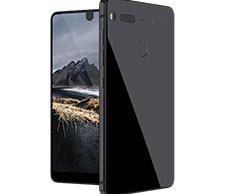 The iPhone is deservedly a popular phone, offering an easy-to-use operating system and many great features. However, as someone who has been using an iPhone since the original launched, I understand why many users opt for Android phones. They offer more control and access to users and come in at a variety of price points and form factors. If you want as much choice as possible, Android is the way to go. Android users now have a new choice in the form of the Essential Phone. Somewhat silly name aside, this new phone comes to us from the person who created Android itself, Andy Rubin. First, the basics. The Essential Phone costs just under US$700 with top-end specifications and comes with an edge-to-edge display, with a cutout for the front-facing camera. Save for the camera cutout and a slightly thicker bezel at the bottom, basically the front of the Essential Phone is just one giant display. Specifically, the display is 5.71 inches diagonally and offers 2560 x 1312 resolution. There is plenty of power behind that big screen too. The Essential Phone has 4GB of RAM and 128GB of storage to go with its Qualcomm 835 processor.

What about the camera features of this new Android phone? The built-in camera is the world’s thinnest dual camera system in a phone, per the official site. It uses color and monochrome sensors to capture “up to 200 percent more light than traditional phone cameras.” It’s not clear which phone cameras count as traditional, but the team has clearly put an emphasis on low light performance. The autofocus system has been optimized as well, offering “better focus with depth tracking.” The rear cameras include 13-megapixel Dual RGB + Mono cameras with “image fusion technology.” The lenses are f/1.85 aperture and the focal lengths are not yet specified. 4K video can be recorded up to 30 frames per second and Full HD (1080p) video can be recorded at up to 120fps. The front-facing camera is 8 megapixels and can record 4K video. You can read more about the camera technology here. A particularly interesting feature of the Essential Phone is that it can accept magnetic accessories, which can communicate wirelessly with the phone while attached. One of the accessories will be a 360-degree camera, “the world’s smallest 360° personal camera.” The 360° camera accessory uses dual 12-megapixel fisheye cameras with f/1.8 apertures. Each camera has a 210° field of view and the camera can record 360° UHD video at up to 30fps. The 360° camera will retail for $200, but it can be reserved now for $50 with the purchase of the Essential Phone. There is a lot more to learn about the Essential Phone. You can read about the motivation behind the phone here and see its features and specs here. Billed by numerous media outlets as the anti-iPhone, the Essential Phone does mark a stark contrast to Apple’s popular device – although they both annoyingly lack headphone jacks – but it remains to be seen how much market there is to be captured. Both Apple and Samsung have a loyal following. Can the Essential Phone chip away at the premium smartphone market? If you’re interested, you can order yours now.

Tweet
Comment
Previous Story Compatibility issue: Sigma announces that MC-11 mount converter may not focus properly on Sony A9
Next Story Google officially takes Nik Collection off life support and announces it will no longer update the software