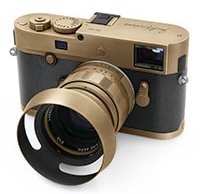 The late Jim Marshall was well known during his career for his music photography, which earned him the Grammy’s Trustee Award. Marshall was the first and to date the only photographer to achieve this honor. To celebrate the work of Jim Marshall, Leica Camera and the Jim Marshall Estate are releasing a limited edition Jim Marshall set. Marshall acquired 20 different Leica M cameras during his life and all of his iconic images were captured with Leica cameras and lenses.

Limited to 50 units, the “Jim Marshall Set” is built around a Leica M Monochrom and Leica Summilux-M 50mm f/1.4 ASPH lens and retails for just under $13,000. Both are made of brass and include a special “laiton” finish, which provides a matte finish and a one-of-a-kind look for each set. Further, the lens, while constructed with modern optics, includes the “classic knurled focus ring and round lens hood reminiscent of the 1960s.” The camera and lens are also adorned with Marshall’s autograph and the set comes with a special, numbered edition and estate embossed copy print of Marshall’s “Thelonious Monk at the Monterey Jazz Festival 1964” and a special numbered edition of the book “Jim Marshall: Jazz Festival.”

In addition to the releasing the special limited edition “Jim Marshall Set,” Leica is also honoring Marshall by featuring his work in an exhibit at the Leica Gallery Los Angeles. The exhibit, “Jazz Festival,” will showcase Marshall’s images of jazz icons including Miles Davis, Nina Simone and Thelonious Monk. All photographs in the exhibit are included in the book that accompanies the “Jim Marshall Set” camera and lens. Marshall was perhaps best known for his rock and roll photography, but he was a regular frequenter of jazz clubs and jazz festivals. The exhibit will open on June 15 and include a guest lecture from Marshall’s former assistant and the owner and operator of his archive, Amelia Davis. Longtime friend and photographer Bruce Talamon will also be speaking about Jim Marshall’s legacy and work. The exhibit will be open to the public through July 31.