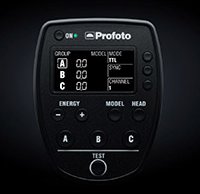 Fuji Rumors reported last September about Profoto's plans to support Fujifilm with a dedicated Air Remote with TTL and HSS capabilities. Today, those rumors became reality as Profoto has announced the Air Remote TTL-F for Fujifilm.

The Profoto AirTTL was first announced in November of 2013 and it started with support for Canon and Nikon. Sony support came next and earlier this year, Profoto added support for Olympus. It's clear that many professionals are using Fujifilm cameras, and with the addition of the GFX, the demand for full Profoto support has been growing.

The Profoto Air Remote TTL-F will offer an operating range of up to 1,000 feet (300 meters) and control of up to three groups of lights on each of its eight channels. The TTL mode allows for fully automatic flash control and true point and shoot workflows when using Profoto B1, B2 and D2 flash heads. The HSS mode allows for much better control over light in outdoor shooting situations, allowing much faster shutter speeds than are otherwise possible using Profoto lights with Fujifilm cameras.

Profoto says that the Air Remote TTL-F will start shipping at the end of the year. Pricing has not yet been announced, but all other Air Remotes for dedicated camera systems cost $419, so that's a safe assumption.