A blast from the past: Polaroid relaunches its instant camera business with the new OneStep 2 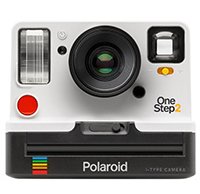 Polaroid is back with a vengeance. The reemergence of the instant camera is an interesting one spearheaded by Fujifilm and their Instax cameras, but you can trace its origins back to the 70s when Polaroid released the foldable SX70 and then a few years later, the simpler OneStep camera. The simple camera had a fixed focus lens and it produced a film that developed in minutes. "Shake it like a Polaroid picture" said OutKast in the popular song "Hey Ya!" It wasn't shake it like an Instax.

The original OneStep had a single button and was easy enough for anyone to use. It was rugged, cheap and simple. A commercial success of the highest order. It all shuttered to an end in 2007 when Polaroid gave up on film and stopped its production. However, Polaroid has returned with the Polaroid Originals OneStep 2. The project has been run by Oskar Smolokowski, who was formerly CEO of the Impossible Project, a company which reproduced then-discontinued Polaroid film. Smolokowski now runs Polaroid Originals and the OneStep 2 is their very first camera. What's old is new again. What about the new OneStep 2? It costs under $100, so the affordability of its lineage remains intact. What about simplicity? That's here also. The OneStep 2 has a compact plastic body with a simple design and control scheme. There are modern amenities here too, though, including a USB-charged battery (which should last for 60 days), glowing LEDs that show how much film is left, a built-in flash and a self-timer. An image starts appearing about two minutes after capture and after 15 minutes, you have a vibrant, sharp image. Close focus distance has been halved from the original's four to a mere two feet, making the OneStep 2 a selfie-friendly instant camera. The OneStep 2 takes a new type of film, i-Type, which is available in color and black and white variations. The camera can also accept 600 film. The i-Type film comes in packs of eight and has a square 3.1" inch image area. It's $16 per pack. To learn more about the Polaroid OneStep 2, click here. You can preorder the $100 OneStep 2 via the links below.