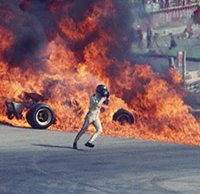 For car fanatics, there is something special about the roar of an engine. It's not easy to point to what exactly makes cars special, and perhaps there are as many answers to that question as there are cars on the road. It could be the unique shapes, the incredible engineering or maybe just the flat-out speed of a supercar.

No matter the answer, work of automotive photographer Easton Chang is sure to inspire awe from even the most subdued car fan. Chang was recently featured by SmugMug Films and the video below shows us the different ways he captures his unique, dynamic car photos.

That is not the only automotive photography story we have to share with you today as CNN has also just published a great story about a motorsport photographer, Joe Honda, whose real name is Nobuyuki Jozuka. What makes this story particularly interesting is that it has been written by Honda's daughter, CNN Digital Producer Emiko Jozuka.

"My father has always lived life in the fast lane. As a student in post-war Japan, he'd skip class to speed around abandoned sites in Tokyo with his biker friends. They'd time their laps to see if any of them had the makings of a pro racer," writes Jozuka. Her dad did not have the makings of a racer, but he did spend nearly 50 years from 1966 through 2011 photographing motorsports from the Paris-Dakar Rally to European motocross to NASCAR and everything in between.

While motorsports are about the very fast pursuit of glory, if you spend enough time at the track, as Honda certainly did, you're also bound to witness the horrific intersection of risk and speed. In 1967, at the Monaco Grand Prix, Honda captured the fiery and fatal crash of Lorenzo Bandini. In the end, Honda photographed hundreds of events.

He said to his daughter from a home studio, "Motorsport photography was, by nature, my occupation - it ran in my blood and was my life. I wanted to photograph the people behind the sport." This is evidenced by many of the images CNN has shared, 71 in total, which showcase the racers and fans as much as the cars racing around tracks across the globe.

To see the images and to read much more about Joe Honda, head over to CNN. Joe Honda started his career with $500 to his name, very limited English and by selling his car to head to Europe in a risky, but ultimately successful, career move. It's a fascinating story and well worth reading. "I sometimes had to choose between buying a roll of film and my next meal. It was my youth that somehow kept me from starving. Back then, everything felt possible." It's hard not to be inspired by the passion of Honda.

(Via PetaPixel and CNN)