Previous Story Book Review: “The Edge of the World: A Visual Adventure to the Most Extraordinary Places on Earth”
Next Story Shutter Release: Fashion retouching, 3 lenses shoot the same model, abstract macros at home & more 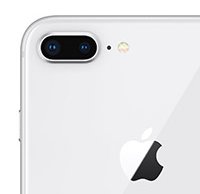 With Apple's newest flagship iPhone, the iPhone X, a little over a month away, the title might not last long. Nonetheless, at least for now, the iPhone 8 and 8 Plus have taken over the top two sports on DxO Mark Mobile's best smartphone camera list.

The new 12-megapixel dual cameras in the iPhone 8 Plus come equipped with wide and telephoto lenses with f/1.8 and f/2.8 optics respectively. They also come with a new "portrait lighting" feature, which is currently in beta, but does look quite intriguing thus far. The iPhone 8 Plus scored a 94, which bests the regular iPhone 8 by two points and the previous champions, the Google Pixel and HTC U11 by four points. On the video side of the equation, the iPhone 8 Plus is actually bested by the Pixel, but remains right near the top of the list. The iPhone 8 Plus (left) and iPhone 8 (right) have taken the top two spots on DxO Mark's smartphone camera scores list.

Head over to DxO Mark for the full review of the iPhone 8 Plus and to see many sample and comparison images. It's staggering how far phones have come over the last few years.

It is not just imaging performance which has improved dramatically with the new iPhone 8 and 8 Plus phones either. 9to5Mac is reporting that the new line of iPhones has a processor on par, at least in terms of peak performance, with a MacBook Pro. Tom's Guide showed that the iPhone 8 was faster than a 13-inch MacBook Pro with a Core i5 processor. In fact, the iPhone 8 is the fastest phone currently available…by a lot.

It will be very interesting to see how the new $1,000 iPhone X does during testing. Early reports suggest that the new phone will be very hard to come by when it launches in early November.