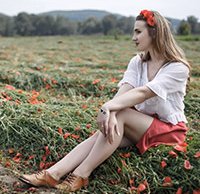 In today's Shutter Release roundup feature we will look at how a $3,000 Canon 80D kit compares when recording video to an $80,000 Arri Alexa professional video camera. Next, we will see a preview for the latest tutorial at Fstoppers with travel photographer Elia Locardi. If you have ever needed to light bald people, a new video from Caleb Pike will help you with that. Another lighting video follows, this time with how to light people to make them look thinner. We will finish with a pair of videos about photo editing. If you're new to Shutter Release, it's a regular series here at Imaging Resource wherein we summarize and share interesting photography content we find from around the web.

Who doesn't love a good competition? Well this 7-minute video shootout between a Canon 80D and an Arri Alexa professional video camera, which costs around $80,000 is not really a fair fight. As you can see in the video below, the Alex is decidedly better. That is not to say that the 80D is bad, because it's not, but it just goes to show the engineering and advanced technology that goes into a purpose-built professional video camera. You certainly don't need to spend nearly $100,000 to record Hollywood-caliber video though either, as PetaPixel points out, DSLRs have been used in the making of many feature films and broadcast television shows.

Professional travel photographer Elia Locardi has teamed up with Fstoppers for numerous tutorials, including a pair of "Photographing the World" tutorial video series. The newest one, "Photographing the World 3," is now available. The tutorial covers in the field shooting techniques, post-processing and comprises 18 hours of video content and much more. You can see a preview below.

Lighting bald people is a bit trickier than lighting subjects with a full head of hair. You can run into issues with glare forcing you to rearrange your typical lighting setups. No problem though, as DSLR Video Shooter (Caleb Pike) has a new video, seen below, which covers tips for how to deal with lighting bald subjects.

The quick video below covers how to use short lighting to make your subjects appear thinner.

Creating a shallow depth of field in Photoshop - PhotoshopCAFE

Sometimes it isn't possible to get a shallow depth of field when shooting. Your lens might be too wide or perhaps it's too bright to shoot at a fast aperture. Whatever the reason, you can add natural-looking blur in Photoshop.

What is the difference between vibrance and saturation in Photoshop? Photoshop Training Channel

Vibrance and saturation are not the same and how you adjust each of them can lead to dramatic differences in your final images. Learn about how and when to use each adjustment in the video below.