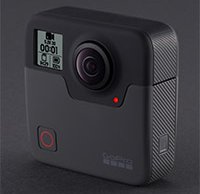 It's a big day for GoPro as they have announced two new camera products, hoping to turn the tide and get their company back on the track they were on a few years ago. Let's get right into it and start with the GoPro Hero 6 Black, which is shipping today.

While the Hero 6 may not look much different than the Hero 5, there's a lot new going on under the hood. Powered by a new processor, the Hero 6 can record 4K footage at 60 frames per second. That's a first for the Hero series and a big step up for action sports fanatics in particular. 4K is not the only resolution with a speed increase, the Hero 6 has numerous slow motion features including 2.7K recording at 240 fps and Full HD recording at 240 fps. If you want your final video output to be at 24 fps, that means you can view action ten times slower than real-time and still have 1920 x 1080 resolution.

Wireless features have been improved as well, with the Hero 6 Black using 5GHz Wi-Fi which will transfer footage to your smartphone three times faster than its predecessor. Digital image stabilization is said to be improved as well. Similar to the Hero 5, the Hero 6 can record 12-megapixel still images in JPEG and RAW files, the Hero 6 is waterproof, has GPS and 2-inch touchscreen.

The 360° camera that GoPro has been discussing since 2016 is nearly ready to hit the market. Coming this November, the GoPro Fusion uses a pair of lenses to record 5.2K video at up to 30 frames per second and it can stabilize its footage using an array of accelerometers and gyroscopes. The Fusion can record 18-megapixel spherical still frames and records 360-degree sound as well.

If this all sounds rather standard nowadays, the GoPro Fusion does something quite distinct that should help set it apart from competition, "OverCapture." OverCapture allows you to customize and move a Full HD frame throughout the 360° video footage. It will allow for a lot of flexibility in recording and open up a lot of creative options for recording action sequences in particular. GoPro showed it off in action during their live event from San Francisco and it looks promising. Additional creative effects include "tiny planet" and a new "Angel View" perspective, the latter of which is almost as intriguing as "OverCapture." Angel View offers a perspective that removes the extension from the field of view and makes it appear like the camera is floating in front of you.

Unfortunately, OverCapture and the other neat features won't be available at launch when the Fusion releases this November for $700, but will be available via an update early in 2018.