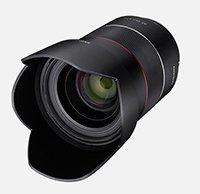 For a long time, Samyang's name was synonymous with full manual lenses for a wide variety of camera mounts. However, lately, Samyang is becoming better known for releasing autofocus lenses for the Sony e-mount.

With 11 elements across 9 groups, including pairs of aspherical lenses and high-refractive lenses, the Samyang 35mm f/1.4 FE is designed to deliver "outstanding resolution" with minimal aberrations. The lens also includes Samyang's "Ultra Multi Coating" to reduce flare and ghosting.

The lens weighs just under 23 ounces (around 650 grams) and is about four and a half inches long (115 millimeters), so it is quite a bit larger than the 35mm f/2.8 Samyang AF lens, which makes sense. It is very similar in overall size to Sony's own 35mm f/1.4 FE lens. However, the Samyang should cost considerably less than the US$1,600 price tag of the Sony Zeiss lens. ePhotozine is reporting a price of £599, which is a bit under US$800. The lens is expected to release in November.