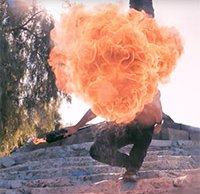 In today's edition of Shutter Release, we have a handful of interesting videos to share with you along with a written tutorial for creating double exposures in Photoshop. The first video shows off "the world's fastest camera slider." Next up is a tutorial for using Photoshop and smart objects to dodge and burn skin for portrait retouching. The final video is about adding metadata to images captured with manual lenses. Then we will finish with a double exposure tutorial.

Shutter Release is a regular feature here on Imaging Resource wherein we share and summarize interesting photography content from around the web.

Daniel DeArco believes he has made the world's fastest camera slider. He wanted to shoot action at a high speed with his camera moving quickly too, so he opted to build a slider himself. You can see it in action below; it's very cool.

Mild NSFW warning: The video below features retouching a swimsuit model, which may be not safe for work depending on your workplace

Photographer and educator Nino Batista has published a new tutorial for dodging and burning during skin retouching. The video below is actually an older tutorial video. Batista is releasing older tutorial videos to his YouTube channel every week, so keep an eye over there for much more.

With a bit of work and some software assistance, you can add metadata for parameters such as focal length and lens information in Lightroom, even if you shot with a manual lens. Learn how in the video below.

Double exposure photography is an interesting technique you can use to make distinct images which combine multiple scenes into a single frame. It was not uncommon back during the film shooting days and with digital, it's even easier to do. Head over to Light Stalking to learn more.