Previous Story Nikon hosting a variety of live presentations this week at PhotoPlus, check them out here
Next Story DxO acquires Nik Collection assets from Google, what does this mean for the future of Nik? 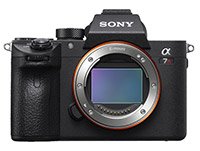 There's big news for Sony fans today, as the company has announced the debut of a new mirrorless camera model and a new lens set for availability next month, as well as the development of another high-end lens slated to arrive just in time for the 2018 Winter Olympics.

Just launched at a press conference in China (with a follow-up set to live-stream in the USA at 10AM Eastern), the Sony A7R III is based around the same 42.2-megapixel full-frame image sensor as in the earlier A7R II. But here, it's been paired with a reworked imaging pipeline that should allow for a stunning 15-stop dynamic range at lower sensitivities, and in Sony's own words, the "highest picture quality of any camera we've ever made."

The Sony A7R III also debuts a new mechanical shutter that allows full-res burst capture to an impressively-swift 10 frames per second, and includes many of the flagship Sony A9's autofocus features. Compared to the A7R II, the A7R III includes 400 more CDAF points, up to 425 from 25. There's also a first for a Sony camera: A new multi-shot, resolution-enhancing pixel-shift function reminiscent of that seen previously in some cameras from Olympus and Pentax.

And of course, the A7R III is also a capable video camera, capable of shooting full-sensor width 4K video without pixel binning or skipping. Priced at US$3,200, the Sony A7R III is set to ship in the US market by the end of November 2017. Want the full details on this impressive new addition to the Sony Alpha lineup? Read on now in our just-published Sony A7R III preview, and be sure to check back regularly for hands-on updates as the day progresses! The latest addition to the Sony Alpha mirrorless lens lineup, meanwhile, is the new Sony FE 24-105mm F4 G OSS, a compact, lightweight standard zoom which covers everything from a healthy wide-angle to a moderate telephoto in a single optic with, in Sony's own words, "serious still and movie performance." The 23rd Sony FE lens launched in just the last four years, it sports a constant f/4 aperture across its zoom range, and is said to be the lightest in its class, with a weight of 663 grams, which bests Canon and Nikon's 24-105mm f/4 lenses by 7 and 47 grams respectively.

The 17-element, 14-group optical formula includes three extra-low dispersion glass elements and four aspherics, of which two are advanced aspherics, and it's said to offer excellent corner-to-corner sharpness throughout the zoom range. And the design also features a direct-drive SSM autofocus motor for quiet and accurate autofocus operation with minimal focus ramping or breathing, plus an improved coupling for more satisfying manual focus control.

Other features include a fluorine coating to repel dust, moisture and smudges, and a dust and moisture-resistant design. Available from the end of November 2017, this optic is priced at US$1,300 or thereabouts.

One final piece of news, as if all of this wasn't already plenty to keep you interested, is the development announcement of one further optic slated to arrive by the 2018 Winter Olympic games in Pyeongchang, South Korea. Here, the only details that we have as of right now are that it will bear Sony's high-end G Master branding, and will pair a 400mm focal length with a bright f/2.8 maximum aperture. Watch this space for more on this lens as Sony gets closer to its launch!

And that's all for today's news. Be sure to continue reading in our Sony A7R III preview -- soon to become a hands-on preview, so keep checking back -- as well as in our upcoming coverage of today's New York press conference for these products, which will feature a live stream from 10:00am Eastern (7:00am Pacific) onwards. You'll find the live stream linked into an article on our news page at that time.

Tweet
Comment
Previous Story Nikon hosting a variety of live presentations this week at PhotoPlus, check them out here
Next Story DxO acquires Nik Collection assets from Google, what does this mean for the future of Nik?