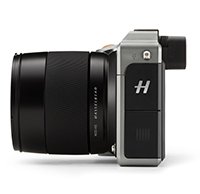 For Hasselblad X1D-50c owners, there are two new lenses to be excited about in 2018. With the new lenses detailed below, Hasselblad will bring the total number of XCD lenses to nine.

First up is a new XCD 135mm f/2.8 lens. This long prime lens comes with its own dedicated 1.7x teleconverter, making it a 230mm f/4.8 telephoto lens. Due to the X1D's larger than full-frame sensor, in 35mm equivalent terms, the new lens will be just over 105mm without the teleconverter and around 180mm with the teleconverter attached.

The second new lens is an XCD 80mm lens. There are no further details available on this lens or the XCD 135mm f/2.8, but specifications will be released closer to launch. Hasselblad states that specifications are subject to change. On that note, Hasselblad has changed the previously-announced XCD 22mm lens to a 21mm f/4 lens to provide users a wider prime lens (16mm equivalent focal length). This is particularly notable given that Fujifilm released a GF 23mm f/4 lens for their 50-megapixel medium format mirrorless camera this summer. In addition to changing the XCD 22mm to a 21mm lens, the company is also sharing aperture details for their XCD 35-75mm zoom lens and their XCD 65mm prime. The zoom will be a f/3.5-4.5 optic and the 65mm lens will have a maximum aperture of f/2.8.

The new XCD lenses, save for the 80mm, are expected to be available in the first half of 2018 while the fast aperture 80mm lens will hopefully be arriving in the second half.