Nikon lens and Olympus camera kit deals: Save up to $700 with these new deals 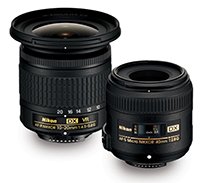 As we approach the annual Black Friday sales, B&H has new special savings on select Nikon lenses and Olympus cameras and camera kits.

Nikon Lens Savings: Save up to $200 on Nikon lenses

For Nikon lens deals, you can save between $100 and $200 on seven Nikon lenses (two of which are sold together in a kit). The lenses include both DX and FX lenses and you can order them all through the links below. The deals expire on November 17, so act now if you want to take advantage of the savings.

Olympus Deals: Save up to $700 on new cameras and lenses

For Micro Four Thirds fans, there are six new deals on Olympus cameras and camera kits. The cameras involved are the Olympus OM-D E-M1 Mark II and Olympus OM-D E-M5 Mark II. You can save $200 and $300 respectively on the cameras themselves. If you purchase either camera in kits, you can save between $500 and $700. Click the links below to take advantage of the deals. Stay tuned to Imaging Resource for more deals as we start preparing our Black Friday coverage. There will be many great deals coming your way in the next few weeks, but these are an excellent start to the holiday shopping season.