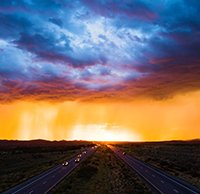 We've featured the time lapse work of Mike Olbinski before here on Imaging Resource. He is an Arizona-based wedding photographer who also loves to chase storms. It's quite the combination. His latest time lapse video, "Monsoon IV," can be viewed below. Be sure to watch it in 4K if possible.

For the film below, Olbinski shot over 110,000 frames, of which he estimates about half made it into the final cut. The editing process, as you might expect, was lengthy as well. The video was shot using a pair of Canon 5DS R cameras with Canon 11-24mm, 35mm, 50mm and 135mm lenses. Mike also used a Sigma 50mm Art lens. The final video was edited using Lightroom, LR Timelapse, Adobe After Effects and Adobe Premiere Pro.

Sit back, relax and enjoy Mike Olbinski's "Monsoon IV" time lapse video below. If you'd like more information about his process, head over to his website.