The Arctic from above: Polar bears like you’ve never seen them before 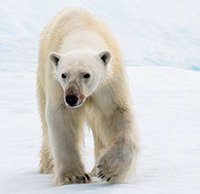 Photographer Florian Ledoux says of his aerial photos of the Arctic, "The scale of the landscape and the incredible species that live there draw me to the Arctic. I was deeply touched when I took my first journey above the Arctic Circle and that feeling continues to intensify as I explore further." In a new article for National Geographic, Ledoux's beautiful photography is on full display and the images and video are stunning.

Capturing imagery of landscapes and wildlife, Ledoux has spent time on foot and in the air in Iceland, Greenland, Canada and more. This is not his first foray into the Arctic with a camera. While working as a photojournalist in the French Navy, Ledoux embarked on a personal photographic project in Greenland, focusing on the Inuit culture and its relationship with their land.

In 2017, Ledoux went on a search in Canada for polar bears. While his first attempt was unsuccessful, a second attempt saw him and his team find four bears traversing floating ice sheets. Ledoux fired up his drone and captured the incredible shot seen below.

A post shared by Florian Ledoux photographer (@florian_ledoux_photographer) on

Using drones in the Arctic poses a couple of unique challenges. While the cold unsurprisingly has an impact, so does the magnetic north pole, which can cause compass errors and affect the drone. To make matters even more difficult, Ledoux operated the drone from a moving sailboat.

"For me there is no better feeling than being close to them and sharing space. I will always remember my first polar bear encounter-I cried during the three hours we stayed near them," Ledoux said to National Geographic. To see more of Ledoux's work, visit his website and follow him on Instagram.