Previous Story Mastering light in landscape photography: Sometimes poor conditions can make for the best photos
Next Story Meet Anthem, the lighting company that wants to upset the industry 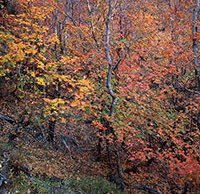 Last week, we covered photographer Ben Horne's first video from his annual photography trip to Zion. Today we have the next video from Horne. If you're unfamiliar with Ben Horne, he works exclusively with large format film cameras. He currently shoots with an 8x10 format camera, although he previously worked with 4x5 format.

As you can imagine, it's not always easy to trek around with large-format film equipment. In the video below, we go along with Horne as he explores Zion, an area he's visited many times. It's interesting to hear Horne explain his thought process and compositions. Plus, it's not often these days you get to see a large-format camera in action.

When shooting in a wooded area like Horne is, it's often a case of "framing the chaos." There is a lot going on in the scene so it can be difficult to find the right composition. For him, he works from the edges in. He finds a good left edge of the scene and then a good right edge and works in a foreground. In the case of a large-format camera, he focuses about a third of the way into the scene and then stops down to an aperture of f/45 to get as much of the scene in focus as possible. Even at that small aperture, the immediate foreground and background won't quite be in focus, but it'll be close.

As you can see in the video above, Horne was not thrilled with his second day of the trip. The photos were not up to his standard, although they are still nice, but day two paid big dividends by allowing him to scout and find a composition to come back to on day three, a photo he teases as one of his favorites from the trip. Stay tuned to Imaging Resource for Ben Horne's next video from Zion.