Previous Story Awesome astro lenses: Comparing the Sigma 14mm f/1.8 against Rokinon lenses for night sky photography
Next Story What is your solution to managing your digital photos and videos? (Because mine sucks) 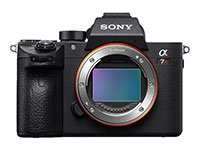 In October, the Nikon D850 was the first full-frame DSLR to hit the 100-point threshold on DxOMark's Sensor Score chart. Now the Nikon D850 has met its full-frame mirrorless match, the Sony A7R III. DxOMark has published its Sony A7R III sensor review and Sony's newest camera looks like a home run for the Japanese tech giant.

Like the Nikon D850, the Sony A7R III has hit the century mark, scoring 100 points for an overall score. The two cameras differ in their relative strengths and weaknesses, however, with the A7R III doing better in terms of high ISO performance and the D850 besting its mirrorless competition in terms of "portrait" and "landscape" scores, which evaluate color depth and dynamic range respectively.

It isn't just about the cross-brand competition, the Sony A7R III also has to compete against its predecessor, which offers the same amount of megapixels at a lower street price. The Sony A7R III may utilize the same basic sensor as the A7R Mark II, but the III improves upon the dynamic range performance by nearly a full stop. This is an incredible engineering achievement for Sony and will make the Mark III a better option for landscape photographers in particular.

For the full Sony A7R Mark III sensor review, head over to DxOMark. For our real-world impressions of the Sony A7R III and all the details you need, check our own Sony A7R III coverage.

Tweet
Comment
Previous Story Awesome astro lenses: Comparing the Sigma 14mm f/1.8 against Rokinon lenses for night sky photography
Next Story What is your solution to managing your digital photos and videos? (Because mine sucks)