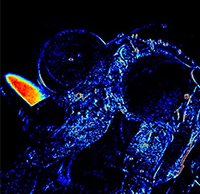 What makes the eyes of mantis shrimp unique? The crustaceans see natural phenomena that we are unable to perceive thanks to their 16 types of color receptors (humans have only three) and mantis shrimp eyes have six polarization channels. Polarization of light is "the direction of oscillation of light as it propagates in space," says Viktor Gruev, a University of Illinois professor of electric and computer engineering. Between their high number of color receptors and their half dozen polarization channels, mantis shrimp can detect more visual information with more efficiency than even today's most advanced scientific cameras.

Scientists have been studying the mantis shrimp eyes and have been able to replicate some of their natural advantages in the form of a new camera, which costs less than $100, and can be used to help detect the early formation of different cancers. The "Mantis Cam" can also be used to provide a new kind of underwater footage which helps us learn more about underwater phenomena we have otherwise been unable to observe. To learn more, check out the video below.