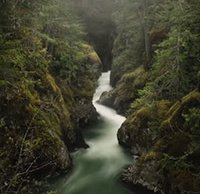 Photographer Adam Gibbs headed to the eastern side of Vancouver Island to visit Little Qualicum Falls Provincial Park. In the vlog below, Gibbs explores the area and shares three images with us.

The first featured image in the video below was shot with a Nikon D850 and Nikon 16-35mm f/4 lens at 24mm, f/14 and with a 1/25s of a second exposure at ISO 400. To cut down on reflected light, Gibbs also used a Breakthrough Photography X4 circular polarizing filter. The other two featured images were shot using the same D850 and filter but were captured with the Nikon 24-120mm f/4 lens.

To learn more about the images and why Gibbs chose the compositions and settings he did, watch his video below.