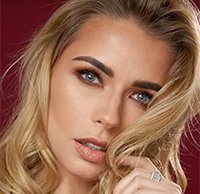 Sony Artisan Miguel Quiles teamed up with Adorama TV to show how to build a three-light studio lighting setup for portraiture. While you don't need three lights to capture great portraits in a studio, three lights do offer a lot of flexibility and control.

Every time you add a light, it can become more complicated. Quiles breaks down his setup piece by piece to help keep it simple. His main light is a Profoto D2 monolight with a white beauty dish. He has a second D2 firing through a softbox and a 4' x 6' diffusion sheet. This is for a soft, interesting catch light. Even with three lights, he still wants to reflect some light from beneath using a silver reflector. A third light is a Profoto D1.

For camera gear, Quiles is using a Sony A7R III with a Sony 24-105mm f/4 G OSS lens. To see how he combines the lighting setup and the camera gear to capture beautiful portraits, check out the video below.