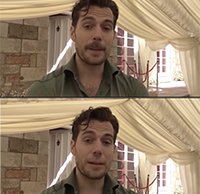 So what does this have to do with Henry Cavill? Any of you who saw Justice League probably noticed that the opening scene with Superman didn't look... quite right. Due to the changing of directors at the last minute and scenes being added later that weren't part of the original plan, some reshooting had to be done. Henry Cavill had already grown a mustache for another role and could not shave it for these reshoots, therefore it had to be removed digitally. But that went poorly. This photo from Buzzfeed captures the essence of the problem: This was a very expensive computer generated job, and it looks hauntingly unreal. The uncanny valley is strong here, and it is one of the largest criticisms visually of the Justice League movie. So what does this have to do with DeepFakes? Well, what if that algorithm and a $500 PC could be employed to do exactly what a $300 million movie studio budget did? What if it could pass as the same thing? Well, I personally think it does.

It is of course not perfect, but side by side with the work from the movie studio, and it looks... at worst the same, and at best a little more refined than their finished result. This kind of technology is incredible, and though it has some less than upstanding current uses (PornHub is banning DeepFakes videos for being "non consensual" by the way, so that's good), it clearly can be refined to do what is already being done poorly by major studios. It can save time and money when there is no choice but to remove a mustache. I would personally rather have my visual effects artists working on lighting effects, explosions, or alien skin texture than fiddling with facial hair and trying to make it look presentable. This is an excellent test case for that being possible.