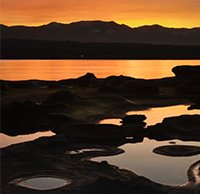 Let's kick the week off with a pair of behind the scenes landscape videos with photographer Adam Gibbs.

The first video is focused on finding order in a chaotic scene. If you spend time in forests, as Adam often does, then you'll come face-to-face with this problem frequently. Even if in second-growth forests, which often have a bit less chaos than an old-growth forest, you still have to deal with the problem of presenting a cohesive frame from a chaotic overall scene. However, this time, Adam is spending more time on the coast, though it isn't proving much less chaotic. Sometimes you can go wide and take in all of the action and embrace the disorder. Other times, you may want to focus in on a small detail or a repeating pattern to make a compelling capture.

In the video below, Adam successfully used each approach on Hornby Island off the coast of Vancouver Island. He utilized his Nikon 14-24mm f/2.8 and Nikon 24-120mm f/4 lenses on his Nikon D850 camera body and captured many beautiful shots. The first, a panorama, is a stitch of two frames.

The next video continues Adam's journey on Hornby Island. This time, he is looking for small scenes within the larger overall scene, specifically searching out interesting color and texture. It's often the case when doing nature and landscape photography that we see beautiful scenes that seem so obviously like they'll be great images, but our eyes can be very deceptive and it can be tricky to turn our point of view into a nice image.

For many of the shots below, all captured with his Nikon D850, Adam opted for a longer focal length on his 24-120mm lens, such as 92mm and 95mm. In addition to the beautiful images, the drone footage is very nice and as always, Gibbs backs his video with some awesome music. So sit back, relax and explore Hornby Island some more.