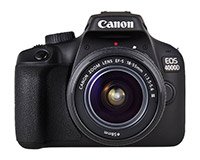 Canon announced three cameras recently. You may have only heard about two of them: the Canon EOS M50 and the Canon Rebel T7. Both of these cameras are positioned as entry-level cameras (although I don't agree with this designation for the M50 given its advanced features and specs) but the third camera Canon announced is very entry-level in every sense of the term. Enter the Canon EOS 4000D, the camera you didn't know existed.

Don't bother searching back through our news archive for information on this camera or looking for a preview page; the EOS 4000D is not scheduled to hit North American shores. If you'd like to read an overview of the camera, head to Camera Labs, where Gordon Laing has text and a video for you to peruse and get caught up. This article is not meant to be a preview for the Canon EOS 4000D, but rather summarize its features and more importantly, evaluate what it may or may not mean for photography on the whole and to consider the possibility that it has totally missed the mark.

Looking at the Canon EOS 4000D, you see what appears to be as much a toy model of a camera as an actual functioning DSLR. It’s plastic, it looks cheap, and it lacks modern bells and whistles. The display is 2.7 inches with only 230,000 dots and the lens mount itself is plastic. It seems that many corners have been cut to save cost. When you look inside the camera, what you find may be spare leftover parts given the specs. It’s a camera born from the land of misfit cameras, to borrow from Rudolph the Red-Nosed Reindeer. The sensor is an 18-megapixel APS-C sensor and it's paired with a similarly-outdated (by technology's strict standards) DIGIC 4+ processor. This underwhelming combination adds up to paltry 3 frames per second continuous shooting. The autofocus system has only nine points. Nine. What is this, 2005? This camera seems in nearly every way, save for its inclusion of built-in Wi-Fi and NFC, to be very much from the past rather than the present. Knowing that, what, if anything, makes it special? That would be its price. Brand-new with an 18-55mm kit lens, the Canon EOS 4000D costs around $500. That's pretty good for a brand new DSLR. However, you can find older cameras -- which probably will have newer components than the 4000D -- for less during good sales. You can get a Nikon D3400 with two zoom lenses, including a 70-300mm zoom, with a free Nikon DSLR value pack for just under $600 right now, for example. If you want to go the mirrorless route, you can get a Sony A6000 with a zoom lens for around the same price. Heck, a Canon T5i, which remains better than the "new" 4000D in nearly every way, is $549 with the same kit lens.

While the Canon 4000D's launch price is special (read "incredibly cheap"), it isn't actually quite the massive savings it appears to be at first glance. Canon is marketing the 4000D as a camera that is simple to use and allows for excellent storytelling. I don’t know that I agree with that, but I do know that I don't agree with how the camera is being positioned, at least in the UK market.

Canon has long shown an emphasis on education and taken many steps toward helping young photographers. I think that the 4000D should've gone even further in the cost-cutting direction and be aimed squarely at emerging markets and students. The camera appears to be comprised of Canon’s old spare parts; those 18-megapixel sensors were eventually and inevitably going to be dumped in the trash if they weren't used, right? I think that there is a lot of value in giving creative freedom to young people who may not have the money for a new camera, even at the admittedly low price point of the 4000D, and that value goes above and beyond whatever profit margin Canon can squeeze out of the 4000D. For your typical consumer, the Canon 4000D doesn't possess much appeal. Wasim Ahmad over at Fstoppers wrote a scathing piece on the camera which hits on a lot of excellent points. He writes in the very first line, " Canon’s tepid 4000D isn’t released in this country yet, but the fact that it even exists is a sad commentary on where camera manufacturers are today." To the extent that the camera is marketed toward standard markets, I agree. However, the narrative could have been different. There's nothing wrong with a "my first camera" type of DSLR. Dedicated cameras, even as smartphones continue to get better, can still do things that your phone cannot.

Canon should consider cameras like the 4000D as an opportunity to fill classrooms with affordable and capable cameras that can act as an entry point for young artists and storytellers. The 4000D should cost even less and it should be in the hands of young people in countries where a $500 camera is a luxury that simply cannot be afforded. I would love to see a cheap, easy-to-fix and easy-to-replace camera be at the center of a larger and broader movement toward giving voices to people who have long gone unheard. There are so many stories out there which deserve to be told and making versatile cameras more accessible is a step toward that end.

It's odd to call a manufacturer greedy when a camera is so low priced right out of the gate, but the move to include so many low-end pieces and still charge $500 for it leaves few to come to any other conclusion. Obviously for many of us reading Imaging Resource, we care about Canon and all manufacturers being aspirational by way of innovation and advancing camera technology, and moves like the 4000D don't do that in the slightest. There's a place in the world for yesterday's camera too, and it's not on store shelves in the UK (or at your local Best Buy in the US, should the 4000D ever hit North American markets), it's in classrooms around the world, particularly ones who may not otherwise have access to digital cameras.

“Does Canon have a secret plan? Another view, from Dave Etchells”