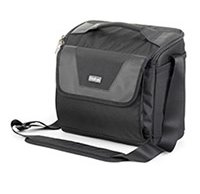 Think Tank Photo has launched a brand-new series of photo shoulder bags, the new StoryTeller series. The StoryTeller bags comprise a trio of bags, each sharing the same overall design and many features, but offering different carrying capacities. The bags feature a flip-top lid for quick access to your gear and utilize premium materials while still coming in at an affordable price point (more on that later).

Let's start with the largest of the new StoryTeller shoulder bags, the StoryTeller 10. The big can hold an ungripped DSLR or mirrorless camera body along with two to four standard telephoto lenses, with hoods attached and reversed, and a 10-inch tablet. Think Tank offers an example kit of a Nikon D750 with an attached 24-70mm f/2.8 lens, 70-200mm f/2.8, 85mm f/1.8 and an iPad. All three bags have an adjustable padded shoulder strap, a secure closure for main compartment, two memory card pockets, zippered pockets, expandable front pocket, stretchable side pocket for a water bottle and an included seam-sealed rain cover. Regarding weights, the StoryTeller 5 is 1 pound when empty, the 8 and 10 are 1.3 and 1.5 pounds respectively (0.5, 0.6 and 0.7 kilograms). The Think Tank Photo StoryTeller bags cost around $65, $70 and $85 respectively, making them very competitively priced. You can order them through the affiliate links below:

Alongside their new StoryTeller shoulder bags, Think Tank Photo has also released a new Modular Belt System V3.0. The modular belt system allows for quick access to your gear while being better-suited to the size of contemporary camera gear.

The belt system shifts the weight of your camera gear from your shoulders to your waists, allowing for better all-day comfort when out shooting. The new pouches are expandable to fit pro-sized lenses with hoods attached in the shooting position rather than being reversed. Further, there's a new Camera Clip Adapter V3.0, which attaches to the Peak Design Capture Clip, Spider Light and SpiderPro camera clips. The Modular Belt System V3.0 patented rotate or lock technology allows photographers to freely lock down pouches or rotate them while kneeling, sitting or running. The Lens Changers V3.0 features a one-hand drawstring closure which secures lenses and features a wide-mouth opening for one-handed access. In addition to new versions of the Lens Changer 15, 25, 35 and 50 pouches, there's now a new Lens Changer 150, which holds a 150-600mm f/5-6.3 lens with a reversed hood.

There are also new modular essentials and accessories, which you can see here.