When does a hard-edge graduated neutral density filter work best? 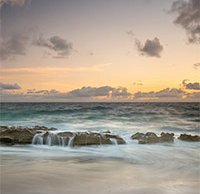 Australian photographer Andrew Marr is certainly spoiled for coastline. This time, he's exploring Burns Beach, which features nice waves and many rocks, which can act as a good foreground element. He's shooting at sunset, but he's not going to get a traditional sunset due to dense clouds along the horizon. However, he might get some nice clouds further up in the sky and some nice colors around and after sunset.

Join Marr on a relaxing seascape shoot and learn more about his camera settings and compositions in the video below. To see more of his work, visit his website.