Previous Story Knowing the ISO and dynamic range limits of your camera is critical for capturing your best shots
Next Story Luminar Jupiter released: New version promises up to 12x faster performance on Mac, 5x faster on PC 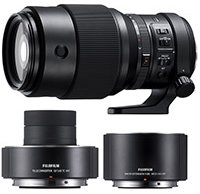 Fujifilm has introduced the longest medium-format GF lens to date, the Fujinon GF 250mm f/4 R LM OIS WR. The lens is also the second GF lens to incorporate optical image stabilization (OIS), joining the 120mm f/4 Macro lens. When paired with the GFX, the 250mm f/4 delivers a 35mm-equivalent focal length of just under 200mm due to the crop factor of the medium format sensor.

Optically, the GF 250mm f/4 lens features 16 elements across 10 groups, including a super ED lens and 2 ED lenses. Fujifilm states that the OIS is rated for up to five stops of shake correction. Autofocus is driven by a new linear motor mechanism and is said to be both quiet and quick. The lens' new autofocus requires your GFX to be updated to an upcoming firmware version (more on that in this week's Firmware Friday!). Looking at the design of the lens, it features the same overall styling as prior GF lenses, but is of course larger. The lens is built of magnesium alloy, and it offers dust, weather and freeze resistance.

Alongside the new GF 250mm lens, Fujifilm has announced their new Fujinon GF 1.4x TC WR teleconverter. This model is designed specifically for use with the GF 250mm f/4, and delivers a 277mm equivalent focal length "without compromising image quality." Fujifilm isn't done there, as the company has also introduced a pair of WR Macro Extension Tubes for the GFX system. The MCEX-18G WR and MCEX-45G WR further expand the macro possibilities of existing GF lenses and are compatible with every GF lens yet released.

Stay tuned for more information as we get samples of these products in-house!

Tweet
Comment
Previous Story Knowing the ISO and dynamic range limits of your camera is critical for capturing your best shots
Next Story Luminar Jupiter released: New version promises up to 12x faster performance on Mac, 5x faster on PC