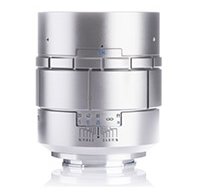 Meyer-Optik-Görlitz has made a name for themselves pushing the optical envelope, releasing a variety of distinct lenses, such as a 50mm f/0.95 prime. They've gone for yet another fast prime with their newest lens, the Nocturnus 75mm f/0.95, which the company has announced is nearly ready for production.

The lens will be released for Leica M, Sony E and Fuji X mounts and will initially be released exclusively through a pre-sale campaign, which will allow photographers to get their hands on the lens for up to 50 percent off the eventual retail MSRP.

Meyer-Optik-Görlitz states that this is the fastest 75mm lens in the world. The lens has 15 aperture blades, which is quite a lot, and has been designed around portraiture. The aperture ring, which is manual, is clickless and the lens has been constructed in Germany. If you are interested in the lens, you should head here and sign up to be alerted for presale openings. The presale is expected to begin next month with availability coming around April 2019.