Previous Story Fujifilm X-H1 Field Test Part III: The X-H1 has new video features, but is it a great video camera?
Next Story Using a reflector for portrait headshots: The basics and the mistakes to avoid 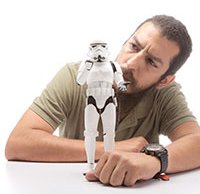 Recently, Phase One's Capture One launched a photography competition on Instagram as part of the Dedication Campaign. The competition invited entrants to share an image which was very important to them and explain what made the image personally special. The winners have now been announced.

Taking home the first prize is Felix Hernandez. For his winning image, Hernandez merged six photos into one as part of a photo series wherein he used toys to images which evoke a sense of fantasy and wonder. It's incredible to see small toys come to life in such an interesting and realistic way. Myth Mountains by Felix Hernandez: Using six photos merged into one, this photo is part of a series Hernandez shot years ago, depicting a fantasy world similar to Star Wars. Copyright Felix Hernandez.

For his prize, Hernandez will go on a photography trip with professional photographer Paul Reiffer in California. The second prize winner, Juan Osorio, won a Wacom Mobile Studio Pro and a Capture One 11 license. Osorio's image also evokes a sense of wonder, although this time instead of using children's toys to create his image, Juan used his own young daughter as the subject. Take me to the Moon by Juan Osorio: Based on Osorio’s daughter’s desire to adventure in to space, the image was shot across various locations over the course of a week -- depicting a little girl in the past, present and future via the reflective balloons, in order to encourage girls everywhere that they can dream big and achieve the impossible. Copyright Juan Osorio.

Taking third prize was Nick Kontostavlakis. His image shows a group of students in Rwanda laughing with each other in the classroom. For his excellent documentary image, Nick wins a Wacom tablet and a Capture One 11 license. For more information on the Capture One Dedication Campaign, click here.

Tweet
Comment
Previous Story Fujifilm X-H1 Field Test Part III: The X-H1 has new video features, but is it a great video camera?
Next Story Using a reflector for portrait headshots: The basics and the mistakes to avoid