Previous Story RED Cinema is building Facebook’s VR camera & the result may be what Lytro dreamed of creating
Next Story Fujifilm X-H1 Field Test Part III: The X-H1 has new video features, but is it a great video camera?

On location with photographer Nick Carver: Scouting, planning and photographing a liquor store 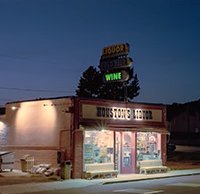 Photographer Nick Carver utilizes many different types of cameras in his work, including both analog and digital cameras. Based in California, Carver recently came across an "unmaintained" liquor store in Santa Barbara County, California, and returned to photograph it with his Polaroid SX-70 and then later with a Shen-Hao TFC 617-A 6 x 17 panoramic camera.

Carver describes himself as "the kind of guy who spends an entire day and evening photographing a liquor store" who "films himself doing it. And then posts that video to YouTube." That's the video seen below. As we join Carver on his liquor store shoot, we get to see him work through what the best time would be to photograph his subject and ultimately shoot the scene at three different times during the day, including midday, dusk and morning light. He suspected that dusk would prove the best and ultimately, it did.

He hasn't shot many dusk scenes using film, so he was unsure how it would go as it proved difficult to meter. As is often the case, the "magic hour" as it's often called wasn't really an hour long so Carver had only a short window of opportunity to capture the desired image with the ideal light. This required him to scout compositions in advance so he would be ready when the light was just right. To help him find the right composition for his film camera, as you typically don't want to take a lot of test shots when using film, particularly larger film formats like 6 x 17, Carver used an iPhone app called Artist's Viewfinder and an Aukey clip-on lens.

You can see more of Nick Carver's work by visiting his website and following him on Instagram.

Tweet
Comment
Previous Story RED Cinema is building Facebook’s VR camera & the result may be what Lytro dreamed of creating
Next Story Fujifilm X-H1 Field Test Part III: The X-H1 has new video features, but is it a great video camera?