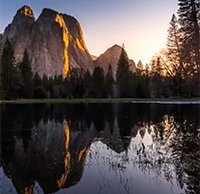 Photographer Serge Ramelli captures a lot of landscape images. He often edits them using his own presets, but what about his in-camera settings? We join him in Los Angeles in Paris in the video below, in which he'll discuss his favorite camera settings when shooting landscapes.

First things first, Ramelli sets his camera to ISO 100, which is his camera's base ISO. In some cases, your camera's base ISO may be even lower or a bit higher, it's not unusual for a camera's base ISO to be 200, for example. In Ramelli's case, he uses manual mode on his camera and picks an aperture, f/8 in many cases, and then adjusts his shutter speed until the image looks as bright as possible without losing any highlight detail.

There are times when he wants to go beyond his camera's lowest base ISO and also use a much smaller aperture. This happens mostly when shooting around water when you want to ensure a very slow shutter speed. It's worth noting you can also use a neutral density filter to achieve the same result. To learn more about Serge's camera settings and then join him in his office as he processes and edits the captured photos, watch the full video below.