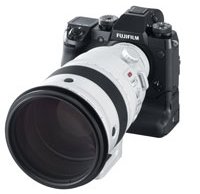 It's a busy day for Fujifilm X Series fans. There's a lot of ground to cover, including the announcement of a new XF 8-16mm f/2.8 R LM WR lens and release information for the upcoming XF 200mm f/2 R LM OIS WR telephoto lens. In addition to these two new XF lenses, Fujifilm has also released an updated lens roadmap featuring a trio of upcoming optics, including an XF 33mm f/1.0 R WR lens, the first autofocus-equipped mirrorless lens to feature a maximum aperture of f/1.0.

First up, let's look at the new Fujinon XF 8-16mm f/2.8 R LM WR lens. This ultra-wide-angle zoom lens delivers a 35mm-equivalent focal length range of 12-24mm and delivers a constant f/2.8 aperture, which should make it well-suited to numerous low-light applications, including night shooting. The lens has a complex optical construction featuring 20 elements across 13 groups. There are four aspherical lenses to help control distortion and spherical aberration and six ED lens elements, including a trio of super ED elements, which are designed to control chromatic aberration. In order to deliver sharp image quality throughout the focal length range and across the entire frame, the lens also has a floating lens element that adjusts according to the zoom position. According to Fuji, this helps ensure sharpness and correct field curvature, which is a common issue with ultra-wide angle lenses. The lens, as evidenced by its "WR" designation, is weather- and dust-resistant, with sealing at 11 different points. With respect to autofocus, the lens uses linear motors for fast and quiet AF performance. You'll be able to purchase the new Fuji XF 8-16mm f/2.8 R LM WR lens this November for $1,999.95 USD in the United States and $2,599.99 CAD in Canada.

To improve usability, the lens includes a new Focus Preset function that will instantaneously change focus to a preset position. This should come in handy for situations where you can predict the location of a subject, such as during sporting events. The lens features linear motors to achieve fast and quiet autofocus performance and includes a new mechanism that fixes the motor group when the camera is not in use to reduce movement of the focusing group. Further, the lens offers up to five stops of image stabilization via its OIS system. The Fujinon XF 200mm f/2 R LM OIS WR features 17 points of sealing as part of its weather-resistant construction. To help keep the lens cool and performing at its best, the lens has also been coated with a matte silver color.

The XF 200mm f/2 lens will be available in late October for $5,999.95 USD and $7,799.99 CAD. The lens will only be available in a kit with the XF 1.4x TC F2 WR Teleconverter, which itself features seven elements across four groups, including an aspherical element. With the teleconverter attached, the lens becomes a 427mm-equivalent lens with a maximum aperture of f/2.8. Here you can see the new 1.4x teleconverter included with the XF 200mm f/2 lens.

Looking further down the road, the updated Fujinon X Mount lens roadmap includes three new additions. There's a compact wide-angle XF 16mm f/2.8 R WR lens, which is being designed as a landscape and travel lens. Next up is the standard zoom XF 16-80mm f/4 R OIS WR, featuring a 5x zoom range and a lot of versatility. Finally, there's a new ultra-fast XF 33mm f/1 R WR lens, which as mentioned earlier, is the first mirrorless lens with autofocus capabilities and a maximum aperture of f/1.0. We will let you know when additional information about these three lenses is released.