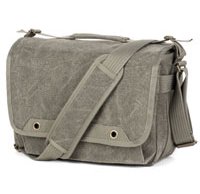 In 2016, Think Tank Photo released the Retrospective series of shoulder bags. These bags combined a lightweight design, retro styling and a wide range of carrying capacities. Over two years later, the company has revisited the popular series and upgraded it with increased gear security and an even lighter weight.

The new Retrospective V2.0 bags look similar to their predecessors and retain the soft, form-fitting design. However, they are lighter. The Think Tank Retrospective 5 V2.0, the smallest bag in the series, is 0.3 pounds lighter than its predecessor, for example. It may not seem like much, but every gram counts when you are carrying gear around for extended periods of time. The largest size, the Retrospective 30 V2.0, has added some interior space while still shedding 0.4 pounds, a carrying solution win-win. Each bag in the series now features a zippered opening under the main flap, to help keep your gear safer, and includes a dedicated interior tablet or laptop compartment and luggage handle pass-through. There is also a compressible water bottle pocket on even the smallest Retrospective shoulder bag. Further, the closure, which could be a bit loud on the original model even with the "sound silencer" design, has been further quieted. As is par for the course with Think Tank Photo bags, the interior is customizable and features movable and protective interior dividers. The bags also feature organization pockets, a removable carrying handle, adjustable shoulder strap with cushioned non-slip pad and feature a water-repellant coating on their canvas exterior. For the full specifications and to order the new bags, click the links below. The bags all come in a sandstone color and pricing ranges from $150 for the Retrospective 5 V2.0 to $200 for the Retrospective 30 V2.0. Stay tuned to Imaging Resource for a full review of the Think Tank Retrospective 30 V2.0 bag in the coming weeks.