Face detect AF and sports: Sony A9 and Sony 400mm f/2.8 G Master lens struts their stuff at the US Open 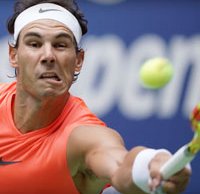 Sony Artisan Patrick Murphy-Racey has been photographing sports regularly during his twenty-five year career as a photojournalist, although before this year, he has never photographed the US Open tennis major. It’s long been a dream of his and he finally got to actualize the dream this summer. Murphy-Racey headed to the US Open armed with a Sony A9 and the new 400mm f/2.8 G Master lens.

If you’re a Sony shooter, particularly one with an interest in sports or wildlife photography, you’ve likely been keeping tabs on the Sony FE 400mm f/2.8 GM OSS lens. While it is a lens well outside the budget for most photographers, given its $12,000 price tag in the United States, it is also something many of us are interested in seeing more about. After all, it’s the flagship telephoto lens in the Sony G Master series. Of course, shooting, and fast-paced shooting in particular, is about the camera as well. We also see how the A9 performs using face-detect and eye tracking autofocus. Having shot sports, including tennis, for many years, Murphy-Racey is used to certain focusing challenges. The net can often catch a focus system's attention when trying to track a subject and you often need to make many quick and precise adjustments to your selected focus point. However, Patrick utilized face-detect, which allowed him to freely compose while shooting, knowing that the camera would often lock focus on the subject’s face, regardless of their position in the frame. It’s a boon to have that much freedom when shooting. See for yourself in the videos below.

If you’d like to see more sports photography with the Sony FE 400mm f/2.8 GM, head over to our own William Brawley’s hands-on report from photographing soccer earlier this summer.