Laws of Light: Overpower the sun with high-speed sync 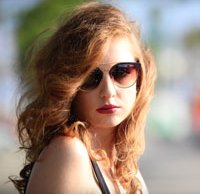 As part of Jay P. Morgan’s ongoing Laws of Light video series, his latest video is all about high speed sync. High-speed sync strobes allow you to shoot at shutter speeds faster than your camera’s built-in flash sync, which often ranges from 1/160s to 1/250s. If you are shooting outside in bright light, particularly with fast lenses, a camera’s built-in flash sync will often not be quick enough. That’s where high-speed sync comes in.

(Via The Slanted Lens)