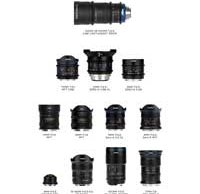 Ahead of Photokina, Venus Optics has announced eight “new and unique” Laowa lenses. In total, the company will be showing off a dozen lenses for the first time in Europe as Venus had previously announced four new lenses in China at Beijing P&E.

Let’s start with the cinema-oriented optics. Venus has announced the Laowa OOOM 25-100mm t/2.9 Cine zoom lens, which is the first cinema style zoom lens offered by Venus Optics. The lens has been designed to be parfocal and deliver nearly zero focus breathing throughout the entire 25 to 100mm zoom range. The aperture remains fixed at t/2.9 throughout the range as well. The t-stop aperture ring is stepless and has an industry standard 0.8 mod / 32 pitch gears. There is 270 degrees of rotation, allowing for smooth iris pulls. The lens weighs in at just over two pounds.

Speaking of Micro Four Thirds, Laowa has announced a quartet of new MFT lenses. Starting at the widest end, the Laowa 4mm f/2.8 Fisheye lens delivers a 210-degree angle of view and weighs only 0.3 pounds (136 grams). A bit longer, the existing Laowa 9mm f/2.8 Zero-D lens will now be available for MFT mount. This lens is already available for Fuji X, Sony E and Canon EOS-M mounts and will deliver an 18mm equivalent focal length on MFT cameras. Compared to existing versions of this lens, the new MFT version will offer better vignette control and continue to deliver nearly-zero distortion. The 12mm f/1.8 lens offers a 24mm equivalent focal length and has 13 lens elements across 10 groups. The lens can focus as closely as 5.5 inches (14 centimeters). The new 17mm f/1.8 lens (34mm equivalent) has 9 elements across 7 groups and weighs a mere 0.36 pounds (160 grams) and is only 2 inches (5 centimeters) long. Turning our attention to Sony FE mount, Laowa will be showing off their new 10-18mm f/4.5-5.6 FE zoom lens, which is the widest lens available for Sony full-frame E-mount cameras. The lens has been designed primarily with travel photography in mind and is only 4 inches (less than 10 centimeters) long with a weight of 1.1 pounds (under 500 grams). The wide angle of view makes the lens suitable for landscape and architecture photography. The lens has 14 elements in 10 groups and includes a pair of aspherical elements. There is a dedicated filter holder in development which will allow the lens to utilize 100mm-wide filters. The aperture ring can be toggled between clicked and clickless via a switch on the lens barrel.

For Canon and Nikon DSLR cameras, Laowa will be displaying their 100mm f/2.8 2X Ultra Macro APO lens. This 2:1 macro lens, the second in Laowa’s lineup, features an apochromatic characteristic, meaning that the lens will display minimal chromatic aberrations. The lens features a dozen elements across 10 groups and has been designed to deliver very sharp performance at macro and regular shooting distances. The Canon EF version offers automatic aperture control while the Nikon version has aperture coupling.

Finally, Laowa hasn’t forgotten about medium-format cameras. Laowa is making a 17mm f/4 Zero-D lens for the Fujifilm GFX. This lens is the widest optic available natively for G-mount cameras and offers a 13mm equivalent focal length (113-degree field of view). The lens offers close-to-zero distortion and has an 86mm filter thread. It is designed with landscape, architecture and interior photography in mind. The ultra-wide prime includes 21 elements across 14 groups and has two aspherical elements and a trio of extra-low dispersion elements. Distortion and chromatic aberrations are promised to be minimized thanks to the advanced optical design and technologies.

Pricing and availability for these new lenses has yet to be announced, but if you’d like to get your hands on any of them and will be attending Photokina, many lenses will be available for free half-day rentals from Venus Optics’ Photokina booth, which will be in Hall 2.1. Photokina begins on September 26 in Cologne, Germany and runs through September 29. For more information on Laowa lenses, click here.