Previous Story How to edit your landscape images in Lightroom in under 5 minutes
Next Story The best tripod head for wildlife photography: Comparing ballheads, gimbals and video heads 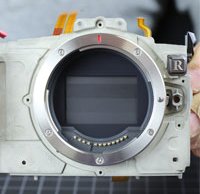 For Canon fans in particular, the announcement of the new full-frame mirrorless camera, the Canon EOS R, was met with a lot of excitement. For Roger Cicala at Lensrentals, he was interested in taking a Canon EOS R camera apart. For those of us who like to see how cameras are designed and what sort of technology lay hidden underneath the plastic and metal, the teardowns performed by the Lensrentals team are a treasure trove.

The teardown of the Canon EOS R is particularly interesting because the EOS R is the first camera in a brand-new camera system for Canon, so while Lensrentals expected some similarities to the Canon 5D IV, they couldn’t be sure until the camera was actually opened up. During this process of opening the camera, they discovered that Canon is using a new and improved adhesive tape. This doesn’t matter to most end users, but it’s interesting to note. After removing many screws around the body, the team discovered considerable weather sealing around the knobs, dials and rear display, but not a lot of sealing or gaskets elsewhere. It’s worth pointing out here that Canon assured us that the EOS R has the same level of weather resistance as the Canon 5D Mark IV. Once the camera is disassembled, we can see that it shares many design traits with Canon SLR cameras, but there are nonetheless differences – besides the obvious lack of a mirror. The shutter motor and electronics are at the bottom of the camera, underneath the shutter box, whereas Canon DSLR cameras typically have these components off to a side. While not necessarily a difference, it turns out that the bracket for the tilt/swivel display appears quite robust, which bodes well for longevity.

The team at Lensrentals naturally cares a lot about components being easy to repair, as they rent out and thus end up having to fix a lot of cameras. One of the more frustrating aspects of a camera design are when pieces are soldered onto larger boards, which is the case with the Canon EOS R and its SD card slot, which is soldered to the board. Another item of note is that the sensor features spring-loaded adjustment screws around its assembly. This allows the assemblers to test and then align the image sensor such that it is parallel within a few microns to the lens mount, assuring high image quality. The image sensor has sensor adjustment screws, so that the sensor can be measured and adjusted during assembly, ensuring a nearly perfect parallel alignment with the lens mount. Image credit: Lensrentals

There are a lot more excellent images of the inside of the Canon EOS R and tons of details about its design and construction over at Lensrentals. The team has already also taken apart a Nikon Z7 as well, although the full writeup of that teardown is forthcoming. It will be interesting to see how the insides of the two new full-frame mirrorless cameras compare.

Tweet
Comment
Previous Story How to edit your landscape images in Lightroom in under 5 minutes
Next Story The best tripod head for wildlife photography: Comparing ballheads, gimbals and video heads