Previous Story Nikon reaffirms their desire to be a video camera company with appealing Z6 Filmmaker’s Kit
Next Story If you are struggling when shooting vertical photos on your tripod, consider an L bracket 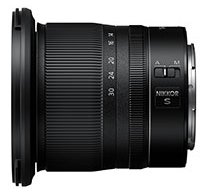 At CES 2019, Nikon has unveiled the first wide-angle zoom lens for their brand-new mirrorless camera system with the Nikkor Z 14-30mm f/4 S. The lens is not only a first of its kind for the Nikon Z system, but is also the world's first full-frame 14mm lens which can accept screw-in filters (the lens has an 82mm filter thread, to be exact). This new offering should prove to be a popular choice for landscape, travel, event and architectural photographers using Nikon's new Z6 or Z7 mirrorless cameras.

Leveraging the new design of the Z mount itself, which is larger in diameter and offers a much shorter flange distance than Nikon's F mount, the 14-30mm f/4 S features a brand-new optical design. The lens has 14 elements across a dozen groups, including four extra-low dispersion (ED) elements and a second quartet of aspherical elements. Further, it includes Nikon's Nano Crystal Coat to reduce ghosting and flare, ensuring images with high contrast even when the lighting conditions are challenging. While the new Z Mount offers not only new optical possibilities, it has also been designed to allow for lenses to be smaller and more compact without sacrificing image quality. The Z 14-30mm f/4 S lens is only 3.5 inches (89 millimeters) long and weighs just over a pound (17.1 ounces/485 grams). It is around 30 percent lighter and shorter than the AF-S Nikkor 16-35mm f/4G ED VR lens for F-mount cameras and is approximately 50 percent lighter and 35 percent shorter than the AF-S 14-24mm f/2.8 lens for F-mount -- which is, of course, a full stop brighter. In the case of the 14-30mm f/4 S, compact and lightweight doesn't mean sacrificing reliability, as the lens has been designed to be dust and drip resistant, although it is unclear as yet how much weather sealing is featured in the lens. Regarding its performance, the 14-30mm f/4 S lens features Nikon's latest Stepping Motor (STM) technology, promising smooth, fast and quiet autofocus, and making it a suitable choice for both stills and video work. Further, in addition to quiet focus, the lens has also been designed with minimized focus breathing in mind, meaning that the angle of view will not change when adjusting focus given a set focal length. Like existing S-Line Nikkor Z lenses, the new zoom has a customizable control ring, which can be used for tasks such as manual focusing, exposure compensation and aperture control. The lens is also fully compatible with the Z6 and Z7's 5-axis in-body image stabilization.

The Nikon Nikkor Z 14-30mm f/4 S lens will be available this spring for a suggested retail price of US$1,299.95. Stay tuned to Imaging Resource for more on this exciting lens as we approach its release including future hands-on testing. Tweet
Comment
Previous Story Nikon reaffirms their desire to be a video camera company with appealing Z6 Filmmaker’s Kit
Next Story If you are struggling when shooting vertical photos on your tripod, consider an L bracket