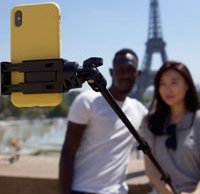 With how people use smartphones, DxOMark Image Labs felt it was time to update their scoring metrics for smartphone cameras. While many photographers are primarily concerned with how a smartphone's rear camera(s) perform, it remains the case that a lot of people utilize the front-facing camera on their phone for still photography and video. DxOMark has thus introduced their new DxOMark Selfie score, a first of its kind.

I was able to talk with DxOMark Image Labs to discuss the new Selfie score and learn more about their testing process in general. The Selfie score protocol has been carefully-designed to mimic a variety of real-life shooting situations and convert them into standardized and repeatable testing procedures, including over 1,500 test photos and over two hours of video captured in indoor and outdoor situations. The accompanying testing results are then analyzed across a subset of parameters and converted into a final Selfie Score with photo and video sub-scores. It is important to note that the Selfie score is different from the existing DxOMark Mobile score and thus cannot be compared against one another.

When determining how to evaluate the front camera user experience, the team at DxOMark Image Labs had to consider how the front camera is actually used. It is not as simple as testing the same shooting situations as they do with the rear camera, as people do not use the rear and front-facing cameras in the same way. This leads to an interesting discussion of evaluating camera performance in general. There are, of course, objective considerations such as sharpness, noise levels, color rendering, color accuracy, exposure accuracy and more. These may be handled in different ways by a front-facing camera, but this kind of evaluation can be done with any type of camera. However, there are also other considerations. For a front-facing camera, the most common subject is a person or people. Therefore, when evaluating a front-facing camera, facial rendering and skin tone rendering is of increased importance. Specifically, people capture selfies or "groufies" (group selfies) at various distances. DxOMark has decided to evaluate the front-facing cameras at 30 centimeter, 55 cm and 120 cm distances. Another challenge is that it's common for smartphone cameras in general, but front-facing cameras specifically, to apply some form of beautification during processing, which can often differ based on geography and the smartphone manufacturer. In some areas, the standards of beauty are quite different, especially with respect to how smooth skin appears. The processes result in different image quality challenges and can overly smooth a person's face to the point where eye lashes are removed, facial hair is rendered poorly or even distort a person's facial features. In the case of DxOMark's new Selfie score, smartphones are penalized only for introducing artifacts during beautification, but are not punished for not using beautification.

Some smartphone reviews have already been updated with Selfie scores. More updates are on the way. Image credit: DxOMark Image Labs.

The new Selfie score is live now in DxOMark's smartphone reviews and will be an important component for all future smartphone reviews. It is yet another reflection of the company's diligence with reflecting emerging technologies and how consumers utilize camera technology.