Previous Story You did WHAT to our camera? IR weather testing version 1.0
Next Story Nikon announces new superzoom and new travel zoom ahead of CP+ trade show in Japan 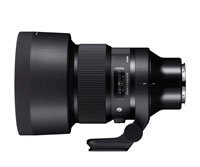 And just like that, the number of confirmed L-Mount lenses has greatly increased. Sigma has announced that they will release 11 L-Mount versions of their current Art series of prime lenses. These full-frame lenses are fully compatible with AF-C, in-camera image stabilization and in-camera aberration correction and in total, the primes will range between 14mm and 135mm.

The following Sigma Art lenses have been announced for L-Mount cameras: As mentioned earlier, these new lenses will be fully compatible with continuous autofocus, in-camera image stabilization and in-camera aberration correction. With their native mounts, the lenses will deliver a more rigid and stable feel as well. The brass bayonet mount has also been treated to enhance strength and the mounts include rubber sealing for dust- and splash-proof construction.

It is also worth pointing out that Sigma will be offering their typical Mount Conversion Service for L-Mount lenses, so users who own existing Sigma Art lenses, you can take advantage of this service to add the native mount for L-Mount cameras, including the upcoming Panasonic S1 and S1R full-frame mirrorless cameras. Sigma has also announced the Sigma Mount Converter MC-21, which will allow Sigma SA and Canon EF mount lenses to be used on L-Mount cameras.

Regarding availability, the official word from Sigma on the availability of the above 11 lenses is "soon." As a member of the new L-Mount Alliance, Sigma's commitment to the mount and to Leica L-Mount and Panasonic S Series cameras is evident.

Tweet
Comment
Previous Story You did WHAT to our camera? IR weather testing version 1.0
Next Story Nikon announces new superzoom and new travel zoom ahead of CP+ trade show in Japan