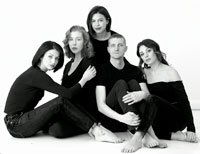 In the 200th episode of his educational video series, OnSet, photographer Daniel Norton is tackling one of the trickiest composition scenarios in portrait photography, a group photo.

Creating a compelling group photo is no easy feat. Starting with the lighting, Norton is opting for a very large, soft light. He is shooting four lights through a six-foot scrimjim, which will result in a sort of scattered, uneven light, which is meant to mimic natural light in the outdoors. When capturing a group photo, it is important to have all of the subjects interact with one another in a thoughtful and meaningful way. It should feel like a photo of a group, rather than an image of multiple separate individuals. To see how Norton sets up his shot, watch the full video below. To view any of the previous 199 episodes of OnSet, click here.