Previous Story Adobe MAX 2018 Creative Sessions: Glyn Dewis simplifies complex selections in Adobe Photoshop
Next Story How to Photograph Everything with Tamara Lackey: Taking your food photography up a notch 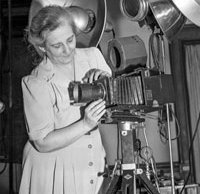 Our friends over at the Red River Paper Blog have long been producing unique content. It's been a while since we have shared their latest work, so let's see what's been going on.

Recently, Arthur H. Bleich wrote about Lotte Jacobi's America. Johanna Alexandra "Lotte" Jacobi was an incredibly accomplished photographer born in Prussia in 1896. After spending a decade in Berlin, Jacobi emigrated to New York in 1935. After two decades in New York, she moved to New Hampshire where she spent the final 35 years of her life. Her portrait subjects included Albert Einstein, Robert Frost, Eleanor Roosevelt and J.D. Salinger.

In 1976, then-25-year-old photographer Gary Samson met Lotte Jacobi. After building a friendship, Lotte expressed concern about what would happen to her work after she passed away. She possessed nearly 50,000 negatives and she wanted them preserved. Samson suggested that she donate them to the University of New Hampshire and over the next six years, Samson helped Jacobi scan and catalog her work. Of Jacobi, Samson has this to say, "Lotte had a tremendous, positive influence on my life and was a great role model who enabled me to become a better photographer and person.” Samson would go on to become dean of the University of New Hampshire's photography department before recently retiring as a Professor Emeritus. Samson has also served a two-year term as New Hampshire's Artist Laureate. Last year, Samson was asked to curate a retrospective of Lotte Jacobi's work. The exhibit, Lotte Jacobi's America: Images of her Adopted Land, is ongoing at the University of New Hampshire through March 29. For much more information on Lotte Jacobi's life and career and Gary Samson's work to keep Jacobi's photography alive, click here.

Earlier this week, Albert Chi wrote about high roads in the United States and the unique photographic opportunities they present. The United States has a very expansive roadway system and some of these roads are remarkably high in elevation. Of the nation's 50 highest roads, the article selects the ten most scenic. The most scenic high road is the Dalton Highway in Alaska at nearly a mile above sea level. Even higher up is number two on the list, Mount Evans Scenic Byway in Colorado, sitting over 14,000 feet above sea level.