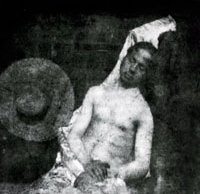 Starting last October, Vox began their Vox Darkroom video series, which shares "stories of the past, one photograph at a time." Since launching the series in the fall, Vox has published five episodes, all of which can be viewed below.

The latest episode is about Hippolyte Bayard, the first photographer to ever hold a public exhibition. Before Louis-Jacques Mandé Daguerre famously became known as one of the creators of the photographic process, Bayard had already invented photography with his own direct positive process. After being persuaded by one of Daguerre's friends, who hoped to gain financially from Daguerre's eventual success, Bayard decided to delay the announcement of his photographic process to the French Academy of Sciences. This decision cost Bayard considerable recognition. After feeling victimized by a perceived injustice and forever doomed to general obscurity, Bayard created the first known staged photograph, Self Portrait as a Drowned Man, which you can learn more about in the video below.

As promised, the prior four episodes of Vox Darkroom can be viewed below and cover a wide range of topics, including the doctoring of an image by the Soviet Union.