Previous Story Nature First: The Alliance for Responsible Nature Photography
Next Story Adam Gibbs on selecting the right lenses for your landscape photography 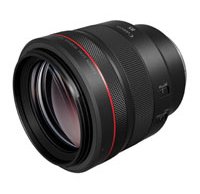 Canon has announced the release of their fifth RF lens, the 85mm f/1.2 L USM portrait prime lens. The lens is the first in the RF-Mount family to incorporate Blue Spectrum Refractive (BR) Optics, which greatly reduce the chromatic aberrations which are typical of large aperture lenses.

Of the new lens, Canon USA's president and chief operating officer, Kazuto Ogawa, says "Optics is at the core of Canon's heritage…Canon is very enthused to now bring the lenses we shared in the RF lens development announcement, starting with the RF 85mm f/1.2 L USM. We envision this product as being the quintessential workhorse lens for portrait photographers of all skill levels." Helping to make the RF 85mm f/1.2 the go-to lens for portrait photographers is its combination of a portrait-friendly 85mm focal length and fast f/1.2 aperture. Canon has designed the lens to not only deliver appealing bokeh, but also very sharp in-focus areas. Returning to the BR Optics, this proprietary optical technology was first introduced in the Canon EF 35mm f/1.4 L II USM lens. The BR optical element is inserted into the lens between concave and convex lenses and it refracts blue light. This allows for "the convergence of the entire wavelength of light to one point, resulting in higher image quality from the center to the edges of an image." In addition to the BR Optics, the RF 85mm f/1.2 also features a single UD element and an aspherical element plus Canon's Air Sphere Coating. The Canon RF 85mm f/1.2 L USM lens will be available starting this June with an estimated retail price of $2,699 USD and can be preordered now. We aim to bring you sample images as soon as possible, so stay tuned to Imaging Resource for more on the RF 85mm f/1.2 lens and other upcoming Canon RF lenses.