Previous Story Adam Gibbs on selecting the right lenses for your landscape photography
Next Story OnSet with Daniel Norton: How to set up and use classic three point lighting

DxOMark reviews the 47.3-megapixel Panasonic S1R full-frame camera and it ranks among the best 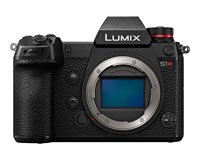 In their review, DxOMark states that the S1R's full-frame sensor "achieves an exceptional overall DxOMark score of 100, which is one of the best results we've seen among all the sensors in our database." The camera's overall score is comprised of three separate parts: Portrait (color depth), Landscape (dynamic range) and Sports (low-light ISO). The relative strength of the S1R in DxOMark's testing is its color depth, which is 26.4 bits. Dynamic range and low-light ISO are impressive as well at 14.1 Evs and 3525 ISO respectively. The S1R is in the same ballpark as other high-resolution full-frame mirrorless cameras, such as the Sony A7R III (42.4 megapixels) and Nikon Z7 (45.7 megapixels). Their overall scores are 100, 100 and 99 respectively. In the individual components, all three cameras compare well to one another, although the Nikon Z7 does lag a bit behind in terms of its low-light ISO performance. For a full breakdown of DxOMark's testing of the S1R and other cameras, head to DxOMark. This chart has been edited for size. To view the full chart, click here.

As we have mentioned before when discussing DxOMark results, there is a lot more to a camera than its sensor score, especially when image quality is so close between many excellent cameras. To learn more about what makes the Panasonic S1R an impressive overall camera, check out our hands-on reports.

Tweet
Comment
Previous Story Adam Gibbs on selecting the right lenses for your landscape photography
Next Story OnSet with Daniel Norton: How to set up and use classic three point lighting