Previous Story Olympus unveils new TG-6 waterproof camera, successor to the wildly popular TG-5
Next Story Fuji GFX 100 First Shots: Time to see for yourself how close 102mp can really get you! At Photokina 2018, Fujifilm announced the development of a 100-megapixel medium-format GFX camera. While they shared some of the primary features of the camera, including its 102-megapixel backside-illuminated CMOS image sensor, phase-detect autofocus system, in-body image stabilization and 4K video, all revolutionary features for a medium-format camera, many details remained undisclosed. Today, Fuji has taken the wraps off the GFX 100 camera and revealed new details.

The prototype we saw last September proved to be quite close to the final design. The GFX 100 has an integrated vertical grip, which allows for an overall thinner design than the GFX 50S camera, while also holding two batteries for double the battery life. The weather-sealed camera eschews some buttons and dials, but introduces a new, higher-resolution electronic viewfinder and a rear sub-display.

While we knew about the 102-megapixel image sensor last year, we didn't know that it will capture 16-bit raw files, something that the GFX 50S/R doesn't do. We also now know that it will offer the same native ISO range of 100-12,800. Across its medium-format image sensor, there are 3.76 million phase-detect autofocus pixels. Alongside a faster X-Processor 4 image processor, the GFX 100 promises up to 210% faster autofocus performance than its predecessor, plus improved face/eye detect and subject tracking autofocus. Further, we have new details on the in-body image stabilization, which delivers up to 5.5 stops of shake reduction.

For the full details on the Fujifilm GFX 100, including price and release information, head to our new Fuji GFX 100 Hands-on Preview. We have just received our own beta sample of the camera and will be bringing you sample images as soon as possible plus additional hands-on reporting. So stay tuned to Imaging Resource for much more on the newest GFX camera. 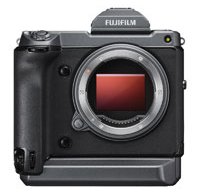