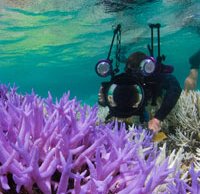 Sometimes a beautiful photograph is much more than that. The image below, which comes from The Ocean Agency, may be visually stunning, complete with vibrant colors, but it showcases the stark reality facing the world's coral reefs. In the last 30 years alone, it's estimated that over half of the world's live coral reefs have died, which has been a substantial blow to ocean ecosystems. The outlook remains negative, which is why the situation must change course quickly.

The fluorescing corals featured in the image are not typically this vibrant but become so colorful only in an attempt to protect themselves against increasing water temperatures. The colors are basically naturally-produced sunscreen; a last-ditch effort to avoid fatal overheating. The bright colors are certainly attention-grabbing, and gaining attention is the basis of a new global campaign, "Glowing Glowing Gone." Along with organizations such as the International Coral Reef Initiative and UN Environment, The Ocean Agency wants to raise awareness about the destruction of coral reef habitats around the world. Adobe and Pantone are joining the cause as well. Pantone has named "Living Coral" the Pantone Color of the Year for 2019. Further, the "Glowing Glowing Gone" campaign is kicking off with a challenge to artists to utilize these glowing colors to create attention-grabbing art to raise awareness of dire situation facing coral reefs all around the world. You can learn much more by clicking here.

Adobe Stock has also joined the initiative by partnering with Pantone to curate visual assets which feature the glowing color palette. All proceeds of the sales of The Ocean Agency's Adobe Stock portfolio will go toward supporting the foundation's mission to protect the earth's oceans and their vital ecosystems. Undoubtedly, photography and other forms of art have an important role to play in bringing attention to issues around the world.