Symmetry in landscape photography: How to compose a symmetrical photo with reflections 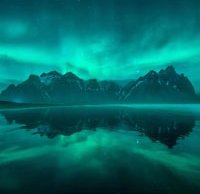 There are many different aspects of a potential photographic composition, but one of the strongest ones, and most common if you shoot near still water, is symmetry. In the video below, Danish photographer Mads Peter Iversen discusses different ways to use symmetry in landscape photographs along with various example images from eastern Iceland.

During his many trips to Iceland – and 44 videos, including the one below, focused on photographing Iceland – Iversen has passed by the mountain, Fellsfjall, many times and never stopped to photograph it. With some free time on his hands and wonderful, misty conditions, Iversen decided to stop and utilize the roadside ponds to create a nice reflection. "Compositionally, it's super easy. Just put the ground line straight in the middle of the frame and have the reflection, that's basically it…But it's so simple and so beautiful and moody. I absolutely love this scene," says Iversen. With his camera set up in the water, he wanted to get out of the pool to ensure he didn't create any waves, so he used a remote to control his camera shutter from the shore.

When photographing reflections with a more detailed foreground, the situation changes slightly. Iversen continued down the road to Kálfafellstindur, where there is still mountains reflecting in water, but the water is interspersed with different bits of land, which eliminates the possibility for perfect symmetry. When dealing with imperfect symmetry, you will typically want to avoid using the horizon to split your frame, and rather focus on putting more emphasis on the foreground or background, depending on the scene. Join Iversen in Iceland by watching the full video below.