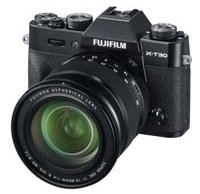 Fujifilm has announced a pair of new lenses, one for each of the company's interchangeable lens mirrorless camera systems. One lens is the X Series (APS-C) Fujinon XF 16-80mm f/4 R OIS WR zoom lens. The other optic is a prime lens for the medium-format GFX system, the Fujinon GF 50mm f/3.5 R LM WR.

Looking first at the new XF 16-80mm zoom, which offers a 35mm-equivalent focal length range of 24-122mm, the lens is designed for portability and versatility. The 5x zoom lens weighs just 15.5 ounces (440 grams), which Fujifilm states is about 40 percent lighter than a comparable 24-120mm lens for full-frame camera systems. The lens is 3.5 inches long (88.9 millimeters) and has a maximum diameter of 3.08 inches (78.3mm). The Fuji XF 16-80mm can focus as closely as 13.8 inches (35 centimeters) across its entire zoom range, resulting in a maximum magnification of 0.25x. The lens incorporates optical image stabilization, which is rated for up to six stops of stabilization. Despite its lightweight and compact design, the XF 16-80mm f/4 R OIS WR lens is weather sealed in ten places throughout the barrel. With 16 elements across a dozen groups, including a trio of aspherical elements and an ED element, the XF 16-80mm f/4 has been designed for demanding shooters across many types of photography. Of interest to videographers in particular, Fuji promises minimal focus breathing, quiet autofocus and intelligent stabilization. Fuji GF 50mm f/3.5 R LM WR lens. This will become the lightest and smallest GF lens when it launches this September.

The weather-resistant lens can focus as closely as 0.55 meters, resulting in a maximum magnification of 0.1x. The lens is 1.89 inches (48 millimeters) long and has a maximum diameter of 3.31 inches (84mm). Inside, the lens includes nine elements across six groups, including an aspherical element.