Previous Story Evoking emotion in landscape photography: The importance of creating a connection with the viewer
Next Story Canon SL3 Field Test Part I: The tiny, record-making EOS DSLR gets its first real world test! 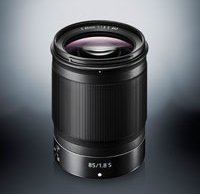 The sixth Nikon Z-mount lens has been announced: The Nikkor Z 85mm f/1.8 S. This fast portrait lens is the longest native prime lens available for the Nikon Z system to date and joins the existing 35mm f/1.8 S and 50mm f/1.8 S to form a trio of f/1.8 prime lenses.

The Nikon 85mm f/1.8 S lens is approximately 3.9 inches (99 millimeters) long with a maximum diameter of 3 inches (75mm). The dust and drip-resistant lens weighs 16.6 ounces (470 grams). Compared to the 35mm f/1.8 S and 50mm f/1.8 S, the new 85mm prime is unsurprisingly larger and heavier, but only by a slight margin in both cases. The lens shares the same general design as both the 35mm and 50mm f/1.8 prime lenses, including a fairly large ridged control ring. Optically, the lens uses 12 elements across 8 groups. Of these dozen elements, there are a pair of extra-low dispersion (ED) elements and the lens includes Nikon's Nano Crystal Coating. The lens has a high-speed Multi-Focus system, which Nikon promises will deliver quick and quiet autofocus and the lens has also been designed to minimize focus breathing.

Nikon is targeting the 85mm f/1.8 S lens as a portrait, wedding and event lens, but also aiming it at video users. For photographing people, Nikon Z owners will want to ensure their Z6/Z7 camera is updated to version 2.0 firmware, which added eye-detect autofocus among other improvements and new features. Of the Nikon 85mm f/1.8 S lens, Nikon's Executive Vice President, Jay Vannatter, said the following:

The NIKKOR Z 85mm f/1.8 S lens is so sharp, yet the background blur is so natural; the incredible detail captured with this lens is nothing short of striking. For fashion and portrait photographers, to wedding shooters and all types of videographers, now is the time to discover why the new NIKKOR Z 85mm f/1.8 will be an indispensable asset for those creatives who are familiar with the outstanding performance of the Nikon Z series. The Nikon Nikkor Z 85mm f/1.8 S lens will be released this September with a suggested retail price of $799.95 USD. For more information on the lens and to view preorder options, click here.