At the intersection of photography & deep space: How black & white images from the Hubble are colorized 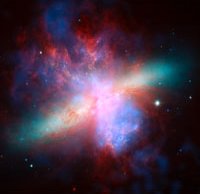 Human eyes are able to see only a fraction of the light in our universe. This spectrum of light that we can see is called the visible spectrum and it is underpinned by our eyes having three different types of cones, which are sensitive to short, medium and long wavelengths of light. These wavelengths correspond roughly to red, green and blue light which means that all of the colors we see are comprised of red, green and blue wavelengths of light. How does this relate to space photography? As you may know, many of the photos we see of space come from the Hubble Space Telescope and the Hubble captures black and white images. These black and white images are then colorized. The process of colorization is based upon the guiding principle of combining red, green and blue light.

When the Hubble Space Telescope captures an image, filters are used to separate light into short, medium and long wavelengths. This is called "broadband filtering." The three black and white images are then digitally given colors based on the visible spectrum: red (longer wavelength), green (medium wavelength) and blue (shorter wavelength). These monochromatic red, green and blue images are then combined to create a "true color" image, which is a visual approximation of what the image would look like if your eyes could actually see at the same distances as the Hubble.

While converting black and white images into "true color" photos using broadband filtering is fairly straightforward, colorizing images from space can become quite a bit more complicated. There are an incredible range of spectrums of light that our eyes cannot differentiate, but scientific imaging can detect, such as the way different gases interact and organize in space. Through the use of narrowband filtering, we can colorize images showing gases like hydrogen, sulfur and oxygen. Sulfur and hydrogen are both visible in red light whereas oxygen is in the green portion of the visible spectrum. If we employed true color techniques to colorize images of nebulas, the image would look quite dull and be uniformative. To visually separate the different gases, scientists instead assign them red, green and blue color based on where they fall on the spectrum, keeping sulfur red, moving hydrogen from red to green and oxygen from green to blue. By combining these three images with false color assignments, we get a much clearer full color image.

The Hubble Space telescope can also capture images outside of the visible spectrum, including infrared and ultraviolet wavelengths of light. These images are also colored in a similar way, with non-visible filtered light being assigned colors within the visible spectrum based on chromatic ordering. At this point, you may be questioning whether different deep space images even show real color at all. Importantly, they represent real data and they are able to present that data in a way that is more useful. While some images don't show colors in the same way we would perceive them with our own eyes, they are useful not only for scientists, but also for the rest of us to better understand what is happening in our universe. You can read more about this very topic and why you may not want to complain about "false color" by checking out this article by astrophysicist Paul Sutter.